Now has a large number of pilgrims kowtowing from Yushu to Tibetan for making a pilgrimage,

“we have prepared more than 1,300 pieces of safety vest free distribution for the pilgrims in order to ensure their pilgrimage safe and peace ",the City traffic police brigade captain Sundin Tsering said. Every year, Yushu greet many faithful pilgrims from neighboring Tibetan areas of Qinghai, Gansu and Sichuan, etc. access to Tibet via the pilgrimage, along State Road 214 and Highway 309 side of the road, the pilgrims inclusions in traffic, there are many traffic hazards.

"214 State Line Road and Highway 309 are important roads, there are speeding happens of passing vehicles, in previous years happened a number of accidents involving pilgrims," ​​Sundin Tsering reports, the Yushu police prepared vests with reflective tape for pilgrims began in mid-April, the work has been included in the work schedule and will be a long-term project, Since distributed free reflective clothing to pilgrims, the traffic accident has not happened any more. “During the day kowtowing on the road okay ,but in evening we are very nervous when A large truck across , now with this 'amulet', it will be a lot of security” the retired cadres Gang Basonin said.

remind drivers to pay attention to avoid in order to protect the safety of pilgrims. 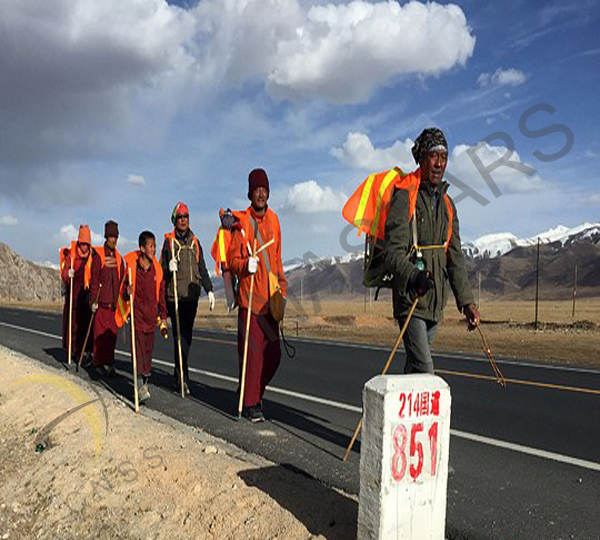