According to Russia's "City Journal," October 22rd message, the British company Omlet animal food designed the reflective vest specifically for chicken, to avoid its being hit by cars on the road.

This vest is made from the material what is known for high thermal insulation performance of Flectalon temperature and reflective tape, according to the company's manager Paul Omlet introduction: "The cost of this product is only $ 15, while the poultry grower's demand for this product is very high.” With wearing the safety vest, you do not worry about the chicken been hit by a car on the road.

Paul believes that not only the cats and dogs, chickens will get the owner's favor. The British loves their pets, so they could not bear to let his chickens running around on the street and the snow. They will take a long time in the shop to pick clothes for their poultry, and some even try their own hand-sewn clothes.

This design for the reflective vest for pets is not achieved overnight. The originally designed is not very appropriate to make chicken with limited mobility. The final product of this vest with reflective tape is not only convenient and comfortable, but also moisture. According to the developers, due to this temperature material capable of regulating body temperature, even those most active chickens will not be burning, nor sweat after wearing the vest. 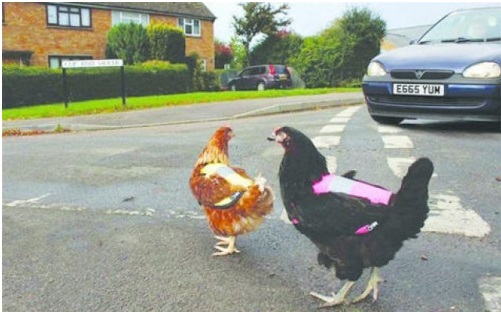