In Switzerland, many short journeys are easily accessible by bicycle. Here's what to pay attention to if you want to ride a bike during the cold season.

Nowadays, about a third of car journeys and about two-thirds of those made by public transport amount to less than three kilometers. Using the bicycle it would be possible to arrive at your destination faster, without stress and above all without producing emissions. The bicycle does not produce phonic pollution or CO2 emissions and does not require any particular physical effort.

Compared to public and private motor vehicles, the bicycle is the least expensive means of transport. In the summer, especially in the cities, many Swiss people almost exclusively use the bicycle to get around: both for going to work and for leisure time. As soon as temperatures drop, many bicycles are nevertheless placed in the cellar awaiting spring. But it doesn't have to be this way. Here are some tips to ride safely even during autumn and winter.

The ordinance concerning technical requirements for road vehicles requires that bicycles suitable for the road are equipped with properly inflated tires, two sturdy brakes, reflectors with a minimum surface area of ​​ten square centimeters front (white) and rear (red) and reflectors orange on the pedals. In the evening, at night and inside the tunnels a fixed front (white) and rear (red) light must be on. Additional lights, even intermittent, are permitted. Starting from 2017, the bell and saddle are no longer mandatory and the sticker for bicycles was abolished in 2012.

During the early hours of the morning and at night, the risk of accidents on Swiss roads is three times higher than during daylight hours. In the case of night precipitation, snow or backlight, the risk factor is even increased tenfold. Clothes with reflectors allow other road users to see cyclists even in gray autumn mornings. If you don't have reflective clothing, the reflective vest of the car is also fine. Alternatively, it is possible to buy reflective bands on the backpack, on the bag or the seat or to wrap around the wrists or ankles. Wet leaves, frost, and ice increase the risk of falls. For this reason, wearing a helmet is particularly important during the cold season.

The muffles certainly keep their hands warm but can be an impediment when we try to operate the brakes or the gearbox. E-bike accumulators are also sensitive to cold and autonomy is reduced. It may be helpful to cover the battery with a neoprene case. The tires of the bicycle must be sufficiently profiled and if worn they must be replaced immediately. Those who equip narrow race tires during the autumn and winter months should replace them with wider tires. The latter has a better grip in wet or icy terrain. The wider tires are particularly suitable for e-bikes as they allow greater driving force on the roadway.

It is not only the equipment that needs to be adapted to low temperatures but also the way to drive. In autumn and winter, it is necessary to adopt a slower and more prudent driving style than the dry season. By traveling faster you sweat and you risk getting cold. The risk of accidents also increases with increasing speed. When cornering it is a good idea to set the exit point and decrease the speed in time to avoid slipping. It is also important to know how to admit to oneself when one's abilities are no longer sufficient to guarantee a safe journey and therefore opt for the bus or the train. 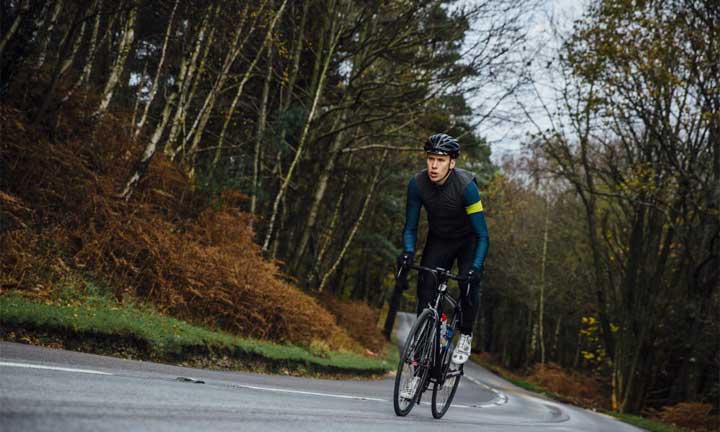