Richard Branson announced Thursday that he is investing in Hyperloop One, a startup developing a futuristic high-speed transportation system first dreamed up by Tesla (TSLA) and SpaceX CEO Elon Musk.

"After visiting Hyperloop One's test site in Nevada and meeting its leadership team this past summer, I am convinced this groundbreaking technology will change transportation as we know it and dramatically cut journey times," Branson said. The photo shows he wearing reflective vest stands with other stuff in the front of massive vacuum tube)

Virgin's plan is to focus on using Hyperloop One to transport passengers and cargo. In 2013, Musk pitched an idea for entrepreneurs to create a massive vacuum tube that could one day transport someone from Los Angeles to New York in 45 minutes. He described the Hyperloop concept as "a cross between a Concorde, a railgun and an air hockey table."

"You may first have heard of the original Hyperloop name through Elon Musk," Branson wrote in a blog post announcing the deal. "Hyperloop technology has been explicitly open-sourced and others have been encouraged to take the ideas and further develop them."

Branson has set an example to all of us that everyone exposed in the hazardous constitution should wear the cloth with reflective tape to avoid accidents. 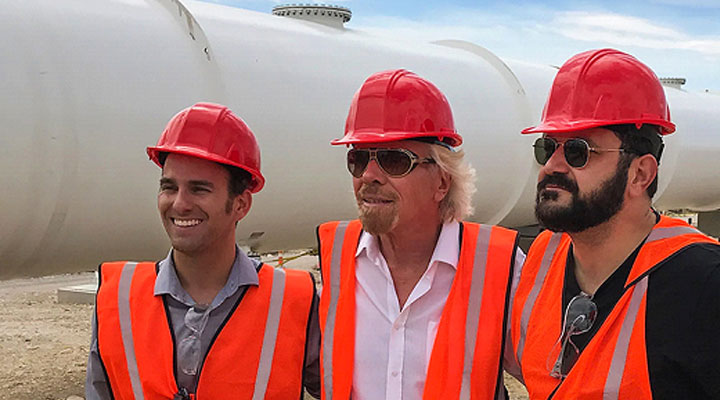