To see and to be seen in the dark season top credo with cyclists. In addition to reliable and powerful lighting systems, cyclists rely on complementary reflective products to make themselves more visible on the road. The bicycle shows what makes cyclists to real light figures.

Reflective elements on the bike

A whole football team of eleven reflective elements was on the bike for years. The reflectors distributed as follows: two yellow per pedal, two yellow in the spokes of the front and rear wheel, two red or a large area at the rear and a white on the front of the bike. If you take a look at modern day-to-day bicycles, you'll notice that only eleven reflectors are rarely counted in daylight. Since a change in the law in 2017, only a red, non-triangular reflector is mandatory. The yellow spoke reflectors have now become obsolete and replaced by tires with white reflective stripes. Thanks to their circular shape, they also reflect the silhouette of the wheel even when standing, and some of them recognize it as such.

Not only vest but also reflective jackets

The biggest projection surface of the cyclist is his body. For this reason, the reflective safety vest is often used in the dark. But not every cyclist wants to be on the construction worker's way. It's a good thing that the cycling clothing industry lights up a multitude of alternatives here. Cycling clothing almost always equipped with reflective materials, according to the purpose more or less. But according to the motto "discreetly in daylight, in the dark conspicuous", there are now reflective jeans, jackets or helmet covers. In daylight, the products look like normal everyday clothing. They only show their hidden function over a large area when they are illuminated. For the special protection for the way to school, many of the products also offered in children's sizes. The practical pants straps made of recycled material and feature reflective tapes for added safety.

Reflective elements just as significant a feature of modern wheel bags as are clever fastening systems or water-repellent materials. There is hardly a manufacturer who renounces today this safety plus. The handlebar, front, and rear carrycot pockets are available in bright signal yellow and made from a corduroy fabric interwoven with reflective yarn. This is how even the classic black areas of the bags reflect. And the rather subtle, because completely black "Office Bag", "Velocity" backpack and "saddle bag" of the series receive such a reflective appeal. With the reflective bags, we are providing a decisive plus in terms of safety - this is where the spotlight and thus the view of other road users first falls.

And even the cyclist's head: his helmet is ideal as a reflector. Signal colors, reflectors and LED taillights to provide better visibility in city traffic. The helmet is hard to miss at dusk and in the dark. The reflective strips arranged in such a way that they reflect spotlight from every angle and roughly trace the helmet silhouette. This makes the wearer quickly recognizable as a cyclist. If the cyclist is on the bike path and the bicycle lighting is covered by parked cars, a bright helmet is a not to be underestimated security feature. 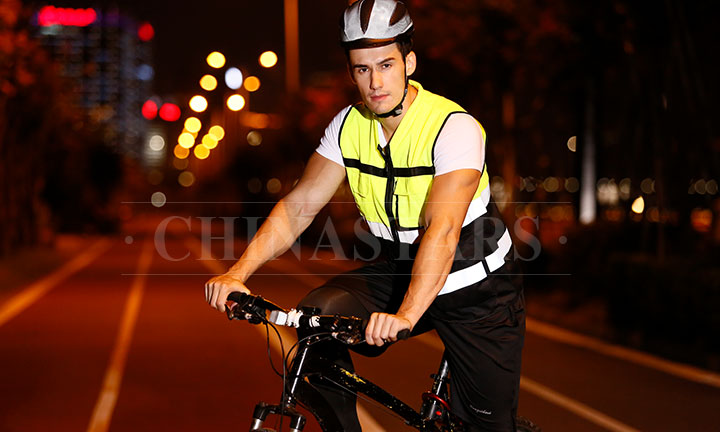