High-visibility clothing, sometimes known as "Hi-Viz", is any clothing worn that has highly reflective properties or a color that is easily discernible from any background. Most industrial employers require it as a type of personal protective equipment (PPE). Yellow waistcoats worn by emergency services are a common example. Occupational wearers of clothing with high-visibility features include railway and highway workers, airport workers, or other places where workers are near moving vehicles or in dark areas. Some cyclists wear high-visibility clothing when riding amongst motor vehicles. Hunters may be required to wear designated high-visibility clothing to prevent the accidental shooting.

The Hurt Report found that very few motorcyclists involved in collisions wore high-visibility clothing, and that just over half of the collisions studied, nearly two-thirds of those involving another vehicle, were due to the motorist unintentionally violating the motorcyclist's right of way. "This dominant culpability of the driver of the other vehicle, emphasizes the special need for high contrast conspicuity for the motorcycle and rider."

A New Zealand case-control study found that the population attributable risks were 33% for wearing no reflective or fluorescent clothing, one-third of motorbike accidents might have been prevented by wearing high-visibility clothing.

Traffic risks to the cyclist are similar to those faced by motorcyclists, with the main differences being that bicycling speeds are typically lower, and the bicyclist wears less protective gear. In a 2009 study, most UK cyclists and almost all motorists believed that high-visibility clothing would increase cyclists' visibility. Almost all drivers agreed that cyclists need to wear reflective vest in low lighting environments, whereas less than three-quarters of cyclists (72%) agreed, and less than half claimed that they always did so.

A randomized controlled trial was conducted in Denmark between 2012 and 2013. The study collected data from 6793 regular cyclists for a year. The results suggest that conspicuity enhancing jackets can reduce by 47% the risk of collisions with other road users that cause injury and 55% for those collisions involving a motor vehicle. The effect of the intervention was higher in winter compared to summer, in daylight and for those participants who reported "high" use of the jackets vs "low" use. The study was based on participants self-reporting data, and there was evidence of response bias, which the authors attempt to correct for, reducing the 47% figure to 38%.

The American National Standards Institute published standard 107 for high-visibility clothing in 1999. The standard defines three classes of successively more-visible garments, to protect workers exposed to successively higher levels of risk from motor vehicles and heavy equipment. The International Safety Equipment Association developed the standard, with revisions in 2004, 2010 and 2015.

The 207 standard has different requirements for fluorescent background material, specifically allowing for a shorter design that allows equipment belt access. It also includes many optional features, such as a 5-point breakaway design clothing for easy removal, panels readily identifying the wearer as an emergency responder, and radio and badge holders. 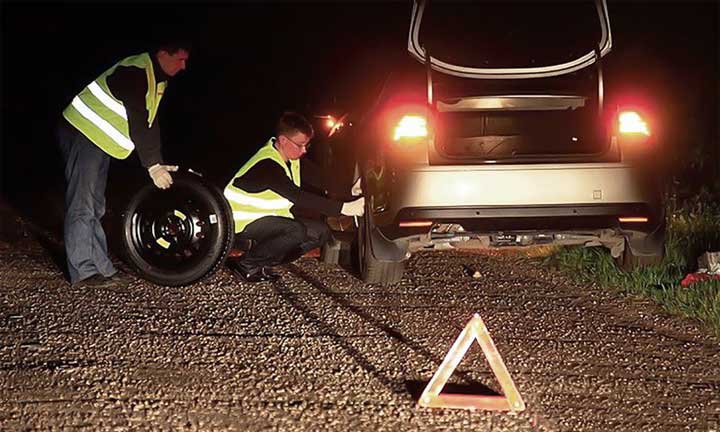