Riding is a very happy thing, but it need to pay attention to safety. Especially in rainy days, the line of sight is fuzzy, very prone to traffic accidents. So this time a raincoat by reflective fabric is very necessary.

Recently, Mr. Wang told reporter that on a recent rainy night, an electric car driver wearing a dark blue raincoat, it’s difficult to distinguish and almost cause a car accident. Traffic police suggested people to wear a light color clothing or reflective raincoat when you cycling in the rainy day, it will keep you safer. Reporter’s survey found that most cyclists do not have such awareness.

Mr. Wang also told reporter that a few days before the rainy night; he drove through the Tangshan District, CSU Avenue near the White Lake Pavilion, a woman wearing a dark blue raincoat riding a sudden emergence of electric vehicles. Mr. Wang immediately hit the brakes, did not lead to a car accident.

Traffic police with reflective vest uniform said that the current transport sector is not the electric car raincoat colors and reflective signs to make the relevant provisions. As the rain vague vision, especially the rainy night, the degree of integration for the darker raincoats and the surrounding environment is high, it’s difficult to cause the driver's attention. The warm, light-colored is more eye-catching, it will increase the car's light reflectance, to remind people to pay attention to their presence. Traffic police suggested that the public in the rain and it’s best to wear contrast with the surrounding environment raincoats, warm colors, light-colored raincoats or raincoats with reflective tape.

Therefore, when riding in the rain, it is best to wear reflective raincoat to keep to be seen. This is safer and will avoid some traffic accidents. 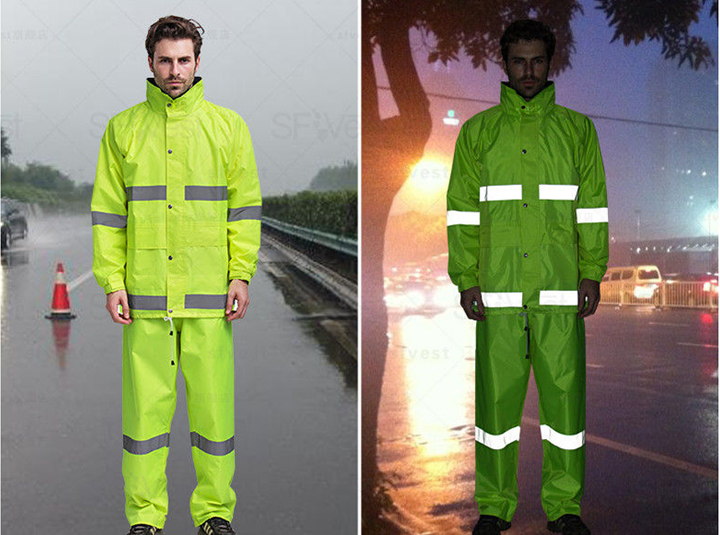