When riding bicycles, look and safety do not always get along. The irresistible appeal of fashion or the desire to empathize with the idols admired on TV often leads Sunday's cyclists to neglect the basic aspect. Weak road users have, in fact, always been in love with two-wheelers, who must put in place a pipeline that protects them from those extra risks, having to dodge many of them when they have to engage open roads to other vehicles. The obligations include wearing a jacket in certain time slots. Let's find out together what and what it is.

According to the provisions of article 182, of the Highway Code, "the driver of a velocipede who circulates outside the inhabited centers from half an hour after sunset to half an hour before it rises and the velocipede driver that circulates in the tunnels have the obligation to wear the vest or the high visibility retro-reflective braces, referred to in paragraph 4-ter of Article 162". Athletes involved in a competitive event are exempt from wearing it, as set out in article 68 of the CdS paragraph 3. Failure to use is subject to an administrative fine of 24 to 97 euros.

The high visibility vest or retro-reflective straps must have the CE and UNI EN 20471 marks indicated and must also be worn in the tunnel. For some time now the Highway Code has forbidden the circulation of bicycles without visual warning devices.

Headlight and a rear red reflector;

Rainproof, windproof, thermal. When it comes to cycling jacket the fantasy (and necessity) of cyclists travel fast. To comply with the regulations even in summer, if one is inclined to circulate during the night or early in the morning, it is necessarily necessary to equip oneself with braces, to avoid putting on an antithetical burden at the temperatures of the period. In winter, to be in order we must rely on thermal jackets with clearly visible colors: white, yellow, red and green are the most popular, while it is not recommended the total black that characterized the early years of the new century.

Traveling safely by bicycle is imperative for anyone who gets in the saddle, for work or passion. 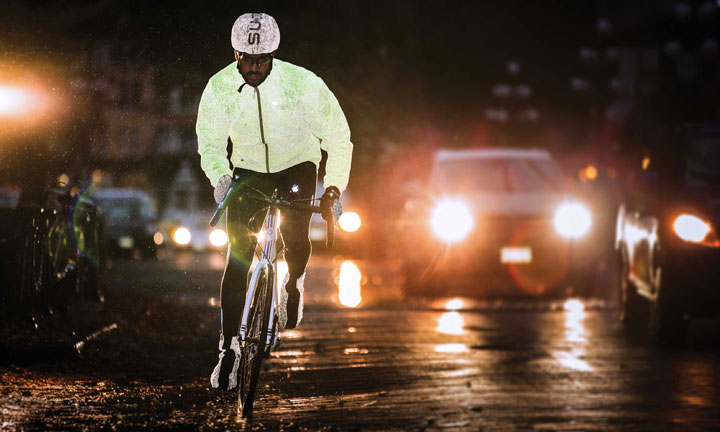