The use of bicycle lighting, reflectors, and properly visible clothing is necessary for safe cycling both during the day and at night, because by determining our position on the road, we become noticeable to other road users. "Invisibility" of cyclists increases the chance of being hit by, for example, a car, so every reasonable cyclist should be aware of the fact that being visible is the same as being safe on the road. It is also obvious that thanks to the lights when driving after dusk we will bypass dangerous obstacles. So what lighting to choose, where to put reflectors and is visible clothing only the one in bright colors?

Bicycle lighting is not only a safe and comfort-enhancing gadget but also a legal requirement. According to the law, each bicycle should be equipped with:

At least one white or yellow front lamp with a continuous or flashing light,

At least one red rear retro-reflector,

At least one red taillight with continuous or flashing light.

Usually, when buying bicycle lighting, customers wonder how much the lamp they are interested in shines and how long the battery that powers it is working. These criteria are the most accurate, only that they usually refer to driving at dusk. However, before we start pedaling in the dark, it is worth considering how to ensure safety during daytime driving.

According to the regulations, the bicycle does not have to have lighting with normal visibility during the day, only reflectors that determine the position are sufficient. Nevertheless, lamp manufacturers offer us a wide selection of daytime running lights. Why this overprotection related to the need to spend another zloty by us? The offer of companies in this area is motivated by an analogy to the daytime running lights used in cars and motorbikes, and therefore a decrease in the number of accidents. Of course, every cyclist has the right to decide for himself in this matter whether the above-mentioned statistics appeal to him, but solutions that manufacturers use, such as headlight enhancement or uneven flickering and different intensity of the rear light are very interesting and probably helpful. If you decide to use bicycle lighting for daytime riding, you should choose, first of all, the brightest rear lamp flashing unevenly and a relatively brightly lit front lamp, which will also be equipped with a flashing mode. Front lighting with a power of over 100 lm is sufficient for driving during the day, while at the rear it is worth to arm yourself with a minimum of 20 lm. It is worth noting that the lamps are mounted in the right places and at the right angle, so that they shine in the right direction, towards approaching cars, and that they do not dazzle other road users.

Every cyclist should be at heart to be visible on the road during the day, by wearing appropriate clothing. During the day, fluorescent colors work best. This is because the sun's rays 'react' with fluorescent materials and give them a glow effect. It should be remembered that clothing in so-called Fluo colors without sunlight just isn't effective. I am aware that not all cyclists are lovers of clothing brightness. For lovers of two wheels, which are closer to subdued colors, it is recommended to use fluorescent accents on moving parts of the body (legs) or outfit colors other than black. It is worth using the contrast method in this respect because any color that makes us stand out a little bit on the road will make us be noticed.

Unlike fluorescent clothing, this reflective clothing works by reacting to artificial light. Therefore, the more directly the light acts on the reflector. During night rides in the city or outside of it, reflective clothing is influenced by the light of lanterns or other traffic participants. In virtually all bicycle clothes you will find reflective piping, which is most often sewn on the ends of sleeves or legs and a back pocket. If you are riding a bicycle in non-specialized clothing, it is worth buying reflective bands, which, for example, in addition to being lit in the dark, can be used to narrow the leg so that it does not get caught in the crank. Many bicycle clothing manufacturers offer a series of reflective items. For example, Chinastars produced the safety clothing line, which is characterized by fluo colors and large reflective elements. Except for reflective clothing, you may also need helmets, jackets, pants, backpacks, gloves, and shoe covers. 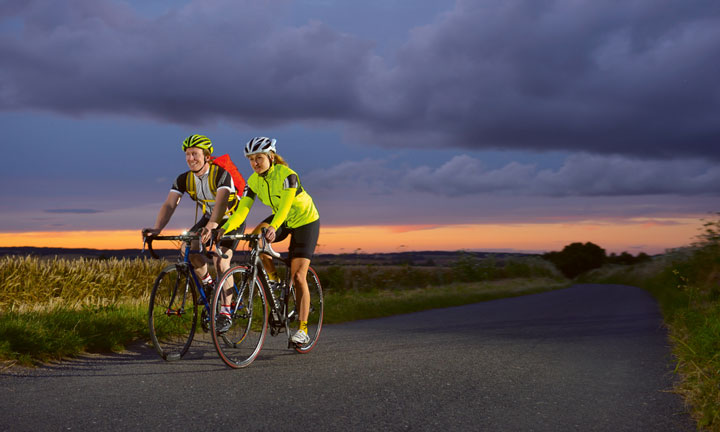