Keep your eyes open in road traffic: The warning formula that was already preached on childhood has its justification more than ever. In the previous year, the number of traffic accidents and their victims rose nationwide for the second time in a row.

Two-wheelers are increasingly affected: they are overlooked in town or hit by country roads. Visible clothing with reflective accessories would reduce these risks considerably.

The statistics of the professional association for energy, textile and electrical media (BG ETEM) also reflect this tendency in their accident events: the number of commuting accidents in road traffic increased in the insured branches of industry.

Growing trend: To work with the two-wheeler

It is mainly young people who start their daily commute to work by bike, moped or motorcycle. For trainees and trained electricians, pedaling in urban areas is part of the usual form of transportation. On the other hand, if you live in rural areas, do not have a driving license or enjoy motorcycling, you will set off on a motorized two-wheeler. The dangers lurking on two-wheeled road users differ:

According to the Federal Statistical Office, by far most of the cyclists (61.6%) and pedestrians (70.2%) were killed in an accident in 2015. In contrast, the rural roads have proven to be extremely risky for motorcycle users: almost 75% of all fatally injured motorcycle users lost their lives on rural roads. The beginning of the week proves to be particularly prone to accidents; on the other hand, the number of bad luck declines during the week.

A common cause of the accident: Lack of awareness

The main cause of accidents involving two-wheelers is in the car. In the flyer "Get off the gas", published jointly by the Federal Ministry of Transport, Building and Urban Development with the German Road Safety Council (DVR) and the professional associations and accident insurance funds, it says: "Pedestrians, cyclists, and drivers of motorized two-wheelers are particularly at risk in road traffic. More than 1,600 of these road users die each year. Common reason: they were overlooked by drivers."

For this group, it is therefore vital to ensure that other people's attention is kept on the road. In the upcoming dark season, in particular, conspicuousness plays a major role, since the visibility of two-wheelers and pedestrians is significantly impaired by light reflections on wet roads. Since the active road users have to process many visual impressions in a short time, but the individual things from the environment mix, two-wheelers lose their contours and are more easily overlooked or not perceived.

Therefore, road users who are not protected by a stable body should take extra measures:

Motorcyclists: for example braces reflective strips and a warning vest that can be closed with zipping by DIN EN ISO 20471.

A predominant part of the employees prefers to start their journey to work in work clothes. However, colorful, eye-catching clothing does not always correspond to the dress code of the craft business - not even that of an electrical business. It is therefore advisable to attach the characteristics relevant to good visibility directly to the work clothing.

Eye-catching solutions for the corporate dress

And that is exactly the trend that the clothing industry has been following for years. More and more providers of workwear have added collections with retro-reflective and fluorescent elements to their range for areas in which no certified warning clothing is required. These are typically attached to trousers, dungarees, parkas, trousers, softshell jackets and waistcoats, as well as weatherproof jackets.

Inserts made of warning fabric

However, retro-reflective additives can do little in dusky warehouses or other areas where light comes from above. The contrast effect of reflective tapes only comes from direct lighting, because the effect is based on directed light reflection: the angle of incidence of the light is also its angle of reflection. A combination of reflective strips and fluorescent yellow or orange inserts is therefore recommended for good visibility in diffuse lighting conditions.

A safety vest must be included on business trips

Neither the legislator nor the BGs sees any indication for wearing warning clothing as a car or van driver on official channels - except for wearing a warning vest after an accident or in the event of a breakdown. The majority of accidents would rather be attributed to unmatched speed, insufficient safety distance, errors when overtaking, etc. That is why BG ETEM offers, for example, driving safety training - especially for two-wheelers.

The risk assessment shows whether - for example when working on supply boxes in traffic areas or on electrical systems on spacious company premises - it is necessary to wear personal protective equipment against arcing faults (PPE) with additional warning protection.

Conditions. Then the protective clothing must also meet the requirements of the warning protection standard DIN EN ISO 20471. It describes three warning protection classes: the higher the class, the larger the minimum area of ​​fluorescent background material and of retro-reflective material that the PPE must-have.

For example, in the highest class 3, at least 0.8 m2 of background material in the corresponding luminous color and 0.2 m2 of reflective material must be used. Class 3 high visibility clothing has reflective strips covering both the torso and the arms or legs. In this way, all-round visibility should be created and maximum security should be achieved.

Providers. There are numerous providers of such PPE. Chinastars is a leading manufacturer of reflective fabric and safety clothing in China with over 16 years of experience. We offer a full range of high-quality reflective tapes, reflective heat transfer vinyl, reflective piping, etc. for workwear and innovative reflective fabrics for casual wear and sportswear. We also manufacture various workwear such as safety vests, reflective jackets, reflective shirts, etc. at excellent quality and competitive prices. 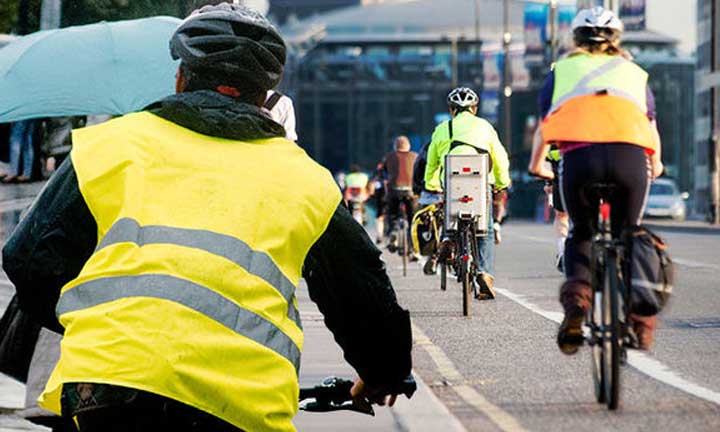