The French "Yellow Vest" campaign, which raised the price of gasoline and diesel, has recently warmed up everywhere. After last week, the promoters called for a second large demonstration in Paris on Saturday. It is estimated that about 30000 demonstrators will be in Paris. The collection of the Champ de Mars near the tower once again protested the rising oil prices. If the authorities are close to the enemy, they will dispatch 3000 police officers.

Last weekend, the "Yellow Vest" campaign spread across the country. Nearly 300,000 people took to the streets to protest. Many conflicts occurred. The police fired tear gas and water cannons to disperse the masses, killing two people and injuring 750 people, including 136 policemen.

In response to the second large demonstration in Paris, the ministry of the Interior and the police have taken comprehensive precautions. The new Interior Minister, Kastane, said that the authorities will do their utmost to protect the sensitive areas of Paris, such as the main streets leading to the Elysee Palace, the tourist attractions such as the Champs Elysées. The Minister of Public Finance and Action Dalmanan reiterated that the authorities will continue to raise the price of gasoline and diesel next year.

The preferred choice for the "Yellow Vest" campaign was originally Place de la Concorde, but the government only allowed protesters to go to the Champ de Mars rally opposite the Eiffel Tower. Karstane explained that the Champ de Mars can accept the demonstration. Because this place provides the necessary security conditions.

The French government plans to raise gasoline and diesel taxes on New Year's Day next year, and some of the increase in revenue will be used to develop energy transition measures such as renewable energy. Some drivers objected to the government raising the tax rate without significantly increasing purchasing power. They launched a series of protests and road closures across the country. They wore fluorescent yellow vests for identification, hence the name "yellow vest".

The "Yellow Vest" campaign is not a traditional protest initiated by a political group or a trade union. It was initiated by online protests against people with soaring oil prices and is spontaneous. Because it is spontaneous, it is difficult for the government to find negotiating objects or communication channels.

From the beginning of the protest against the government’s chaotic oil price, the people extended to demand that Mark Long step down and dissolve the parliament. This time, the Paris gathering was also a spontaneous protest by local people, because they said that they protested for so many days and no one paid attention to their demands.

Polls show that most French respondents believe the protest is justified. A poll conducted by polling agency Odoxa for French news radio and the Figaro newspaper found that as many as 77% of respondents believe that the yellow vest movement is well-founded and three percentage points higher than last week's survey.

There are deep social reasons behind the launch of popular protests. How can the social and economic structure be adjusted in time with market transformation, how can urban and rural areas develop in the long-term, and how can public policies be done on the basis of respecting differences? The balance of interests... These are not only problems in the development of French society, but also an important test for the Macaron government. I have to admit that different geographical forms have different cultural implications. In the face of the crisis and changes in French society, as a bystander, we hope that the situation will not continue to deteriorate.

The yellow vest above is a reflective vest. The reflective vest made of high-visibility reflective material, which enables the traffic police or the police to work smoothly at night or in special weather conditions, thus reducing unnecessary casualties. It plays a special role in the production and life of human beings, especially in transportation engineering. This kind of reflective vest is widely used in the shipbuilding industry, steel industry, machinery industry, petroleum industry, ambulance, parking lot, airport, traffic police, and outdoor work or construction. It is a good safety warning product. The safety vest in this campaign served as a tool for protest, hoping that the campaign would end as soon as possible and that all public facilities would function properly. 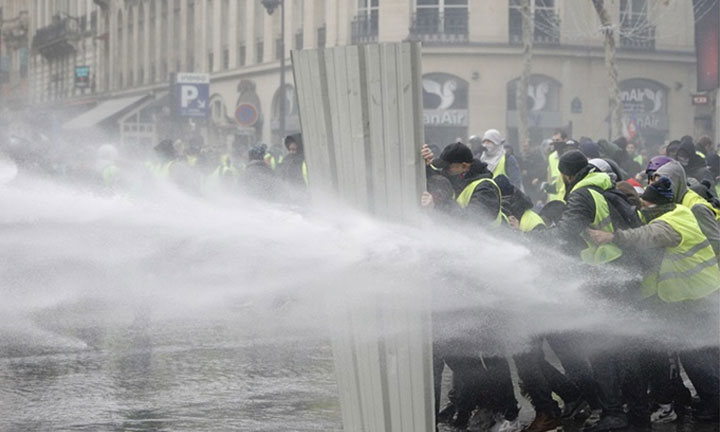