In the autumn days and following the time change many of our daily trips are made at night which increases the risk of an accident. Urban lighting can also wrongly give the impression of being visible on the roadway and of seeing other users correctly. At nightfall, in the rain or snow, seeing and being seen is vital.

"See and be seen" is a saying that is otherwise known as the motto of high society events. As soon as the dark season begins, it also applies to the streets. Because when it is dark outside, people with dark clothing are often only seen at the last moment. Cyclists who are on the move are particularly at risk. Reflectors and reflective clothing significantly increase the safety of cyclists. Because they are recognized by drivers at a distance of 150 meters, for example when they wear one of the yellow reflective vests.

Safety vests are simple and effective helpers. Children especially like to use reflective overcoat. The vest from CHINASTARS corresponds to the European standard for high-visibility clothing. The neon yellow vest comes with two reflective strips and can be adjusted in width.

There are also various products for cyclists, which can easily improve their visibility in autumn and winter.

A helmet with lighting provides more visibility when you look at the bike. The helmet has an integrated LED light that provides 180-degree visibility to the rear and the sides. The helmet also has various reflectors and is available in three bright signal colors.

The high visibility backpack uses a special reflective thread that allows the entire backpack to be reflected in the spotlight. The backpack with 24 liters offers enough storage space for work or school materials.

More light to the front

Helmet lamps have long been popular with mountain bikers. While the light on the handlebar illuminates everything important in front of the bike, a helmet lamp shines wherever you look. They are not without controversy in road traffic, because if set incorrectly they can blind oncoming traffic. The lamp must be set so that oncoming traffic is not disturbed. 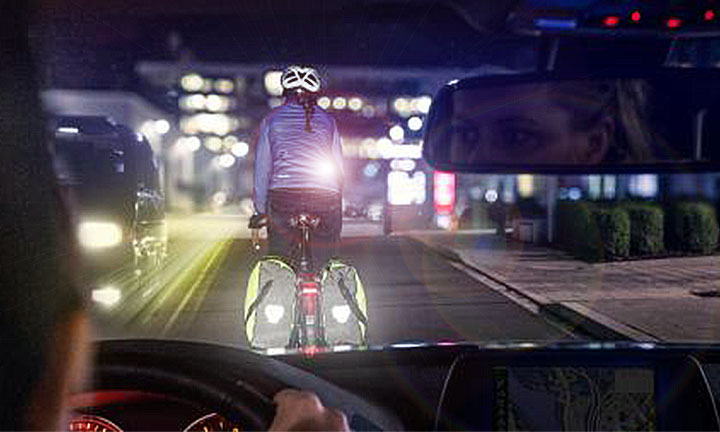