Some time ago, light bulbs and fuses fell out of the mandatory equipment of cars. The composition of the first-aid kit has also been simplified.

Mandatory car equipment is a common element that police officers examine during roadside checks. For many drivers, it used to be a scarecrow, but from October 1, 2018, mandatory equipment has been simplified in many ways. So what is mandatory to take with you in 2020 and what is no longer necessary?

For 2020, the mandatory equipment of the car consists of a reflective vest, a warning triangle, and a first aid kit. On the contrary, a set of fuses and spare bulbs is no longer mandatory. The amendment to the Decree on the Approval of Technical Competence and the Technical Conditions for the Operation of Vehicles on Roads (No. 341/2014 Coll.) Thus reflects the technical conveniences of 21st-century cars. After all, in the age of xenon and diode headlights, the driver does not change the bulb anyway.

In this context, it is also necessary to mention the simplified obligation to carry a spare wheel and a replacement kit. If the car is equipped with so-called running tires, enabling an indication of a defect and emergency reaching, a spare wheel is not mandatory.

Even those drivers who, thanks to the assistance service, have a damaged tire replaced or repaired continuously throughout the Czech Republic do not have to carry the reserve with them. An alternative to the spare wheel is a tire repair kit.

However, if you do not meet either, you will still need to carry a spare wheel (tire rim), including a wheel wrench and a hand jack with sufficient capacity.

As for the first aid kit, from October 2018, it no longer has to include a three-pronged scarf, a patch with a pillow, and a plastic drape. There is also an obligation to change the first-aid kit due to the end of expiration. However, if you use one of the elements, you must of course add it.

When traveling abroad, it is not out of the question to see what the mandatory equipment is in that country. Yes, the Vienna Convention of 1968 states that a vehicle should be equipped according to the country in which it is registered, but its enforcement is sometimes problematic. Although local police officers should take into account during the inspection that the mandatory equipment in the Czech Republic may differ from the given state, the duplication of laws often complicates the situation. For example, when it is the duty to wear a reflective vest when getting out of a vehicle on the highway - the Vienna Convention no longer applies to this.

Therefore, when driving abroad, we recommend that you bring a tow rope or reflective vests for all crew members, which should also be within reach, so they should be located in the cabin and not at the bottom of the boot. In Bulgaria or Poland, it is mandatory to have a fire extinguisher with you, in France an alcohol tester. In winter, pay attention to the local obligation of winter tires. 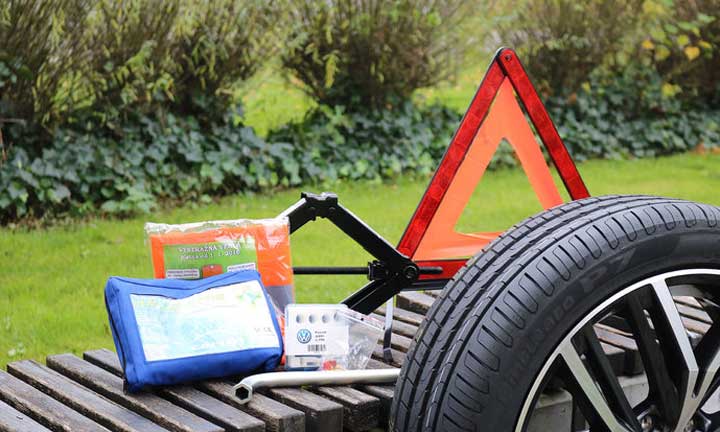