Maybe it's the age that makes people shine, and the accompanying, at best eventually maturing. However, this does not mean - not that we misunderstand - this prudent and mild radiance in advanced age, that wise, benevolent smile and shining deep inside that finds its source somewhere between heart and stomach and soul.

Safety vest over everyday clothing, tentatively fluttering in the wind, the elaborate test method of the European standard more than enough (at least the sewn hint), always committed to safety, always reflective, orange and yellow.

Because, quite honestly, at that time, as a young road user, I just climbed on the bike. Dressed in black and thus almost invisible when it was still dark in the morning or the day did not really want to get really bright in the gloomy winter weather. As a cyclist swallowed by the darkness, thoughtless from today's perspective, headless, daring even.

And maybe it actually has something to do with age, with the onset of awareness of finiteness, always smiling softly on my porter with me driving through the deep street canyons of the city and whispering to me from behind that only survives, the widely seen becomes.

"Take care of yourself," whispers reason, "take good care of yourself and shine well." The reason, as the key to wearing the safety vest according to EN ISO 20471, which, if you look around in today's traffic once attentive, actually appears more often, in cyclists, pedestrians, dogs, the walk in the dark park.

But not because they have been required by law since July 2014 to be carried by cars, trucks, semitrailer tractors, multi-axled tractors and buses, and coaches scheduled to operate on public roads.

In more and more countries, the permanent wearing of safety vests on the bike is now mandatory. The vest for pedals is already an integral part of the garment, at night or in bad weather, even during the day outside closed villages. Failure to comply with the prescribed duty must be punished.

So maybe it's just the subjective feeling of security that gives me my now beloved vest and makes sense, at least to me, as well as to all the other cyclists and pedestrians and dogs in the dark park, who meet me in safety vests, And because it makes us shine. In orange and warning west yellow in the deep street canyons of this city. 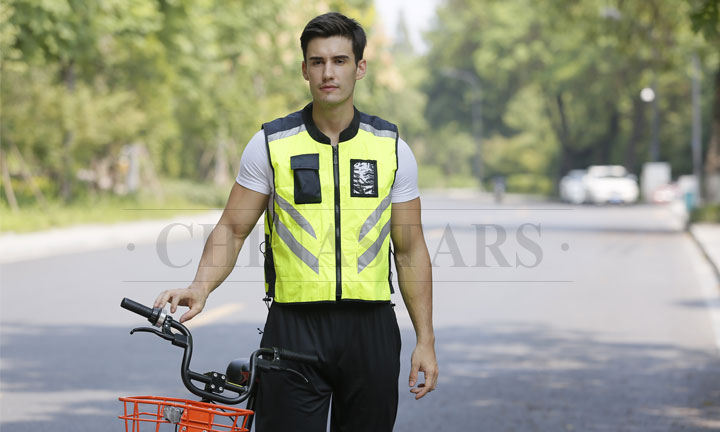