The spring season is approaching. This is the time when many cyclists take to the streets. For most people, cycling is a way of spending free time actively, for others it is a means of communication. Regardless of the purpose for which we use the bicycle, we should not forget about safety and appropriate equipment.

Remember that cyclists are full participants in traffic, but they are completely defenseless when confronted with a speeding vehicle. An accident involving them has extremely serious consequences.

Many factors affect the safety of cyclists, ranging from the time of day and weather conditions. However, the most important thing is the behavior of the cyclists themselves, especially respecting the applicable rules and regulations of the road and the ability to anticipate dangerous situations. The behavior of other road users towards cyclists is equally important.

At the front - at least one white or selective yellow position lamp (there may be a flashing light),

At least one effective brake,

A bell or other warning signal with a non-piercing sound.

The cyclist is obliged to:

Use a cycle path or a bicycle lane if it is marked for the direction in which it is moving or intends to turn,

Exercise extreme caution and give way to pedestrians when it moves along the path for bicycles and pedestrians.

If there is no road intended specifically for cyclists or it cannot be used e.g. due to road works, then the rider should move along the roadside, and if it is not suitable for driving - along the road (as close to the right edge as possible).

A cyclist may use the footpath or footpath when:

looks after a bicycle driver up to 10 years old,

the width of the sidewalk along the road, on which vehicle traffic is allowed at speeds greater than 50 km / h, is at least 2 meters and there is no separate path for bicycles and a lane for bicycles,

weather conditions threaten the safety of the cyclist on the road (snow, strong wind, downpour, black ice, or dense fog).

When using the sidewalk or pedestrian path, the driver is obliged to drive slowly, exercise particular caution, and give way to pedestrians.

With a child on a bicycle

Children under the age of 10 may ride a bike only under adult supervision.

A child up to 7 years of age may be transported on a bicycle, provided that it is placed on an additional seat that ensures safe riding. It is allowed to transport a child in a bicycle trailer.

Only a person over 17 years of age may transport a child on a bicycle or in a bicycle trailer.

When approaching a pedestrian crossing, a cyclist is obliged to exercise extreme caution and give way to a pedestrian on the crossing.

overtaking a vehicle at a pedestrian crossing and immediately in front of it, except for the crossing on which traffic is directed,

avoid a vehicle that was driving in the same direction, but stopped to give way to a pedestrian,

driving along the pedestrian crossing.

The cyclist is obliged to obey the following prohibitions:

driving without keeping at least one hand on the steering wheel and feet on the pedals,

driving a bicycle while drunk, after the use of alcohol or a substance similar to alcohol,

using a phone while driving that requires a handset or microphone to be held.

The safety of cyclists also depends on other road users

First of all, car drivers who should respect the right-of-way for cyclists in places specified by law, and so:

when approaching the crossing for cyclists, the rider is obliged to exercise particular caution and give way to the bike on the crossing,

if it turns into a crossroad, it is also obliged to exercise particular caution and give way to a cyclist riding straight on the road, bicycle lane, bicycle path, or another part of the road that he intends to leave,

when crossing the road for bicycles outside the road, the rider is obliged to give way to the bicycle,

Moreover, when overtaking a bicycle, the rider is obliged to keep a distance of not less than 1 m. 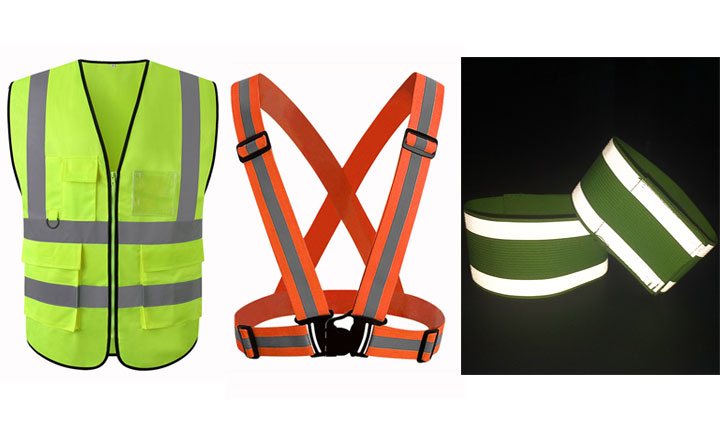 Cyclists take care of your safety!

The bicycle traffic regulations do not require the use of protective helmets and reflective elements. However, it should be taken into account that the helmet protects the head - the part of the body most exposed to injury. On the other hand, a reflective vest, reflective harness, and bands make it easier for the driver to see the cyclist, especially in difficult weather conditions.