With the change of time, road accidents are more numerous, including by bicycle.

This weekend of October 24th and 25th, we changed the time. If this hour allowed us to sleep a little more on Sunday, it also shortened our days, as night fell earlier. And this is not without consequences, especially about bicycle accidents.

Every year, an accident peak is observed during this period. According to Road Safety, there are 42% more pedestrian accidents in November compared to October on the 5-7 pm time slot. You should also know that 21% of cyclists killed or injured are at night.

Road Safety calls for vigilance, this year even more: "indeed, mobility on our roads has evolved in particular recently, with the significant increase in certain practices such as cycling or scootering", we can read in a press release.

This year, after confinement, the use of the bicycle has seen its popularity explode. For many cyclists, this time change is the first. So you have to keep in mind some mistakes that should not be avoided.

1. Not knowing the traffic signs

This is the first mistake not to make. On a bicycle, as well as at the wheel, there are traffic rules to know. You certainly already know that by bike, it is forbidden to drive on the sidewalks. But do you know these road signs?

They must be known by cyclists to know which lanes are prohibited for them, which are recommended or reserved for cycles or pedestrians, but also which roads are two-way, or even which areas give priority to pedestrians.

A mistake which can be fatal if you drive at night: being dressed all in black or without any retro-reflective device.

Road Safety recommends preferring "light-colored clothing" or, even better, to be equipped with a "retro-reflective device".

3. Do not have lights

Beyond being essential for your safety, certain equipment is compulsory for cycling. The retro-reflective vest is part of it "for any cyclist, and his possible passenger, traveling outside built-up areas, at night, or when visibility is insufficient", according to Road Safety.

There are others: the two brakes, reflectors "red in color at the rear, white or yellow in the front, orange in the sides and on the pedals", position lights, "one emitting a yellow or white light at the front and a red light at the rear".

Other equipment is recommended, such as "tires with retro-reflective sidebands" or light reflectors in the frame of the bicycle.

4. Drive less than a meter from the sidewalk

In the city, in the absence of a cycle path, and especially when traffic is heavy when leaving work. However, this is one of the most important rules to respect when cycling: you should, as far as possible, drive about one meter from the sidewalk and parked cars ... but also other vehicles on the road. A hurriedly opened door and a moment of inattention can quickly get expensive. Children can also appear unexpectedly.

This rule also applies outside cities, to avoid ruts or gravel.

You know pretty much everything. Night and day, think about your helmet! And don't forget that any violation is punishable by a fine of 135 euros. 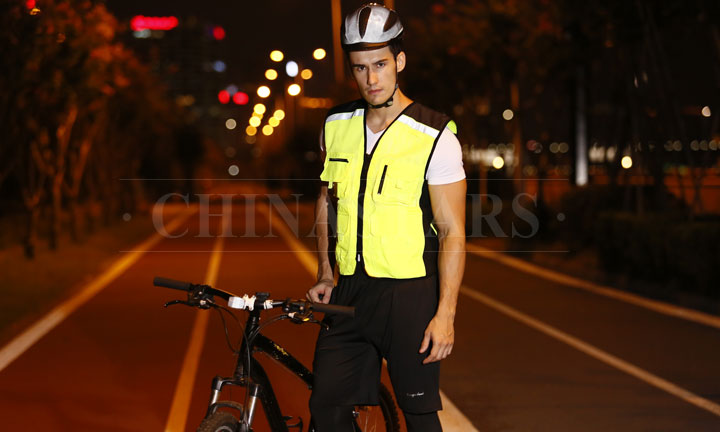